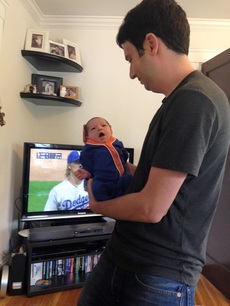 Dan and his daughter Eleanor

Who is Dan Wise?

﻿I met Dan when I started teaching at High Tech High. I was at the week-long "New Teacher Odyssey" and Dan was stopping by for the free lunch. We got to talking, and since then I've learned a huge amount from Dan about being a teacher. He's also an exceptionally nice guy.

Dan started teaching in New York City as part of Teach for America right after he graduated from college. A few years later, he co-founded a High School, and after that he came to High Tech High to teach 10th grade Humanities. But this interview isn't about his career, it's about two things: his family, and his love of the New York Mets.

I interviewed Dan at his apartment in San Diego in January, 2013. We talked for 40 minutes - the story below is taken from the transcript of that interview.

The Story Dan Told Me:

﻿﻿Part 1: Dan's Family
Both sides of my family they came over from Eastern Europe to New York in the late 1800s. On my Great Grandfather’s side, they were fleeing the pogroms in Russia, it was really screwed up for the Jews.

For the others, I think it was the normal “the Old Country isn’t working out, let’s go to America”-type thing.

When he came to New York, my Great Grandfather on my mother’s side was a grocer, and he had various grocery shops around the Bronx. He met my great grandmother when they were both working in a cigar factory, and the foreman was in love with my Great Grandma, so when he found out they were dating, he fired them both.

And we had some rabbis in the family.

Actually, my Great-Great Grandfather, whose name was Isaac Mayer Wise, founded Reform Judaism. So he pioneered stuff like having men and women sit in services together, of not keeping kosher, of having some services in English. Just kind of, American Judaism.  He was pretty amazing: he spoke a whole handful of languages, he wrote plays, he wrote poems, he wrote novels - he was also apparently bipolar, but he had that sort-of bipolar productivity where he’d be depressed for three months and the next three months he’d write a bunch of plays, screeds, and novels, and novels.

His biographies are actually one thing that my grandmother bugged me so much about reading that I never read them.

So my Great-great Grandfather, and my Great-grandfather were both rabbis. the  quote that was passed down to me about my great grandfather was “He was too busy being important to be a good father.” And then my grandfather married my grandmother who was very proud of her inherited family, even though it wasn’t really her family.

My grandmother’s family were actually a classy bunch, they thought they were too good for my grandfather. They used to sell tobacco during World War One to the soldiers, or ship it out, or something. So they were Portland Jewish aristocracy - Portland, Oregon, that is - which I don’t think has a very high threshold.

​
Part 2: The New York Mets
My bedroom in Queens used to face Shea stadium, where the Mets used to play, and my Dad took me  a lot when I was three years old, because my Mom was pregnant with my sister, and it was “boy time”. So we’d buy cheap seats, the usher would ask my dad for his ticket stub, and he’d show his real ticket stub with a twenty dollar bill wrapped around it. Next thing I knew, we had good seats. I don’t think in San Diego you can do that as well, but in Queens - I mean, these guys are making seven dollars an hour, so if you can give them twenty bucks and fill an empty seat, it’s good for everybody.

My Dad’s the kind of guy who reads the newspaper at ballgames, but I loved it. So that’s how I became a Mets fan - from going to games, and from seeing it out of my window.

I just love the atmosphere, I like sports radio, I like listening to people yelling at each other.
Return to Humans of the South Bay
Proudly powered by Weebly